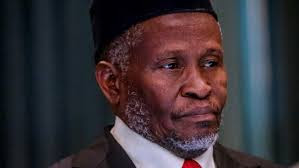 President Muhammadu Buhari has extended the appointment of Tanko Muhammad as the acting chief justice of Nigeria by another three months.

Mr Buhari sent the recommendation to the National Judicial Council and the supervisory body approved the appointment on Thursday, a spokesperson for the NJC, Soji Oye, said in a statement on Saturday.

Mr Muhammad was first appointed in January after the president suspended Chief Justice Walter Onnoghen who was accused of false declaration of asset.

Mr Onnoghen was convicted on Thursday by the Code of Conduct Tribunal, and was barred from holding public office for 10 years. He has denied all allegations against him, and has appealed the ruling.