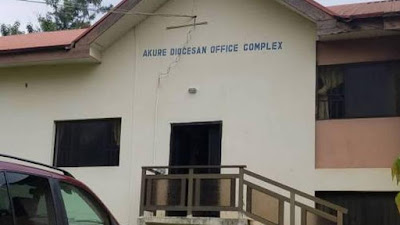 Gabriel Kola Abiodun, bursar of Akure Diocese of the Anglican Communion in Ondo State, has been shot dead.

Abiodun was killed on Thursday morning by gunmen suspected to be armed robbers at the diocesan office complex of the church in Alagbaka area of Akure, the Ondo State capital.

The church bursar was shot by three gun-wielding men, after he made some bank transactions.

According to the eyewitness, Abiodun was trailed from the bank by the gunmen to the diocese, where he was shot dead.


He said: "The man (bursar) had just returned from one of the new generation banks where he had gone to withdraw some funds, which we learnt was probably meant for retirees. The money was about N500,000. He was shot in the thigh.

“I think the armed robbers attacked him, collected the money, before they escaped from the premises. By the time we came out of the building, there were blood stains everywhere on the floor. It’s a very sad thing.”

The church authorities have invited the Police to the scene for investigation.