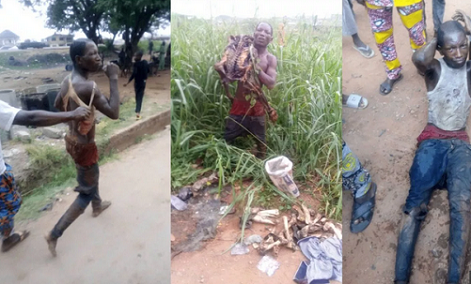 A carwash attendant identified as Ismaila Raji has confessed to killing seven persons, including pupils of Lagelu Grammar School, Ibadan, Oyo State, and drying their bodies with chemicals.

Raji was apprehended by a mob on April 20 at Olorunsogo while trying to dispose of the body of his latest victim, Rasaki Musibau, who he allegedly strangled inside the deceased’s home.

Sources said Raji had been arrested twice for being in possession of human skeleton at Second Gate, University of Ibadan and Benjamin on Eleyele Road.

He was said to have confessed while being beaten by the mob that a popular businessman in Ibadan contracted him and his accomplices, Sunday, Kella, Awilo, Omo Ola and ID Noble to kill people and dry their bodies with chemicals, adding that they usually ambushed their victims.


Raji, who claimed he killed Musibau, a truck mechanic, in self defence, said it was the deceased who attempted to strangle him first.

He said: “I am from Molete Bode in Ibadan. I was arrested at Olorunsogo for killing someone. The deceased is Rasaki Musibau. He begged me to stay at his place when I was at Olorunsogo. I did not want to stay, but he forced me and then he put on his TV set.

“Then, I started seeing some strange faces in the house and I was terrified. Later, the man tried to strangle me, but I overpowered him and killed him with a towel. I tied the towel round his neck and strangled him.

“After killing him, I sprayed a chemical on his body so that it would not smell and would decay fast. I did not want people to suspect anything. I took the body to a dumpsite beside a waste disposal truck at Olorunsogo and bribed the driver with N300,000.

“I stopped sleeping at Olorunsogo and was sleeping in a church at Aremo. I wanted to take the skeleton to Agodi prison, but it didn’t decay fast.

“I have killed seven other people so far and they are mostly pupils of Lagelu Grammar School. I was offered N500,000 by a bakery owner to be killing people.

“My colleagues and I usually sat near schools’ premises. This is where we always kidnap our victims. My colleagues are Sunday, Kella, Awilo, Omo Ola and ID Noble. They are barbers at Aremo Koloko,”

Raji was said to have been handed over to the police after the mob gave him severe beating.

Police spokesman Lawrence Fadeyi confirmed the incident, but said he was yet to be given details.