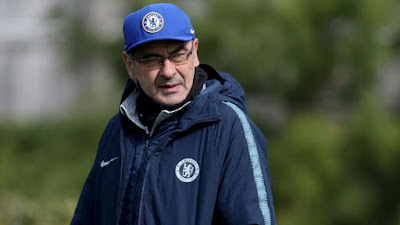 Chelsea head coach Maurizio Sarri has been charged with misconduct by the Football Association following his touchline dismissal in the 2-2 draw against Burnley on Easter Monday.

Sarri was sent to the stands in stoppage time during a fractious encounter at Stamford Bridge, although assistant Gianfranco Zola felt the decision was harsh as his fellow Italian “was just trying to tell our players to get in position”.

The FA has said in a statement: “Maurizio Sarri has been charged with misconduct in relation to his behaviour in the 94th minute of Monday’s (22/04/2019) Premier League fixture between Chelsea and Burnley.“The Chelsea manager has until 18:00 on Friday (26/04/2019) to provide a response.”


In a separate incident, referee Kevin Friend is understood to have received a complaint over claims of racial abuse directed by members of Burnley’s backroom staff towards Sarri. The alleged abuse aimed at Sarri was included in Friend’s report in a tense fixture where David Luiz squared up to Ashley Westwood during a tunnel melee at full-time.