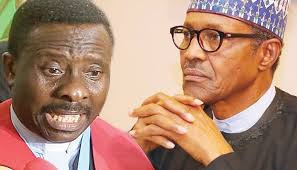 The National Christian Elders Forum (NCEF) has described the visit of the President of Christian Association of Nigeria (CAN), Rev. Samson Ayokunle, with some CAN officials and Christian leaders to President Muhammadu Buhari on his victory in the just concluded 2019 presidential election as shocking.

NCEF disassociated itself from the visit claiming that it is: “sub judice” as the determination of who won the 2019 General Election is still in Court. It is therefore premature and presumptuous for anyone to congratulate President Buhari for “winning” an election that is contested in Court.”

The forum said the visit which was made last week is also not in the interest of Christians.


A statement issued in Abuja on Monday by the  Chairman of NCEF, Solomon Asemota, (SAN) said: “The National Christian Elders Forum (NCEF) was shocked to read in the news that the President of CAN, Rev. Dr. Samson Olasupo Ayokunle, with some CAN Officials and Christian leaders paid a “congratulatory” visit to President Muhammadu Buhari on his purported victory in the 2019 General Elections.

“The NCEF wishes to state that the congratulatory visit to Aso Villa by CAN could not be in the interest of Nigerian Christians who daily bear the agony of thousands of their brethren being killed, maimed, displaced and marginalized in the Jihad launched in the northern parts of the country. It is well known the indifference of the Buhari Administration to the murder of Christians all over the country. This indifference has led many, including foreign observers, to conclude that the Buhari Administration is complicit in the genocide that is taking place in Nigeria.

“The action of the CAN President, Rev. Samson Olasupo Ayokunle, is a further confirmation of all the protests and petitions of NCEF in 2018 querying the faithfulness of Dr. Ayokunle to Christ and to His Church.