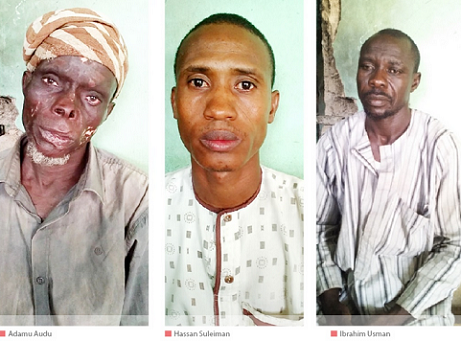 The decision of an upper Shari’ah court sitting in Tudun Wada, Zaria, to sentence three rapists to one year imprisonment with an option of N7,000 fine has generated controversy and anxiety in the ancient city.

The judge of the court, Malam Iliyasu Muhammad Umar, during the ruling said the prosecution led by Sergeant Adamu Yahaya, convinced the court, therefore the three suspects will serve one year jail term or pay N7,000 fine with 20 strokes of the cane.

While presenting his case at the court, Prosecutor Yahaya said the offence committed by the suspects contravenes sections 222 and 117 of the Penal Code.

The two girls are both attending an LEA Primary School in the Tudun Jukun area of Zaria.

According to the officials of a voluntary community association, Gyara Kayanka, who arrested the suspects, the r-pe of the victims had been going on for many months before the suspects met their waterloo.

Many residents of Zaria and human rights activists have condemned the verdict of the judge, especially that he did not support his decision with any provision of Islamic jurisprudence, as Shari’ah is the status of the court.

Kaduna State Commissioner for Women Affairs, Hafsat Mohammed Baba, when contacted said the new law being used in the state says thus: “Section 31; (1) No person shall have sexual intercourse with a child. (2) A person who contravenes the provision of subsection (1) of this section commits an offence of rape and is liable on conviction to imprisonment for life. (3) Where a person is charged with an offence under this section, it is immaterial that: Your lamentations aren’t enough, Madame Commissioner “(a) the offender believed the person to be of or above the age of eighteen years or age of puberty; or (b) the sexual intercourse was with the consent of the child. (4) “Notwithstanding any enactment or rules of law to the contrary, reliable medical, scientific or other physical electronic evidence of rape shall be sufficient to secure a conviction under this section; consequently, the prosecution and the court may dispense with the oral testimony of a parent or of the child victim.”

She said her ministry would follow up the case to ensure justice is served, saying that the verdict of the court would only encourage rapists.

The District Head of Tudun Jukun, Zaria, Alhaji Jibrin Yakubu, urged parents to always monitor the movement of their wards. “School authorities should also interrogate those pupils that report late to school.

This can assist in tracing this type of attitude and those engage in it can be easily exposed,” Alhaji Yakubu said.

The Prosecutor, Sergeant Yahaya, said the charges prepared against the suspects were on “procration of a minor” not rape, saying that there is a difference between the two.

However, Hajiya Hafsa had debunked the position of the prosecutor, saying that the two are the same, and the law has provided for stiffer punishment.