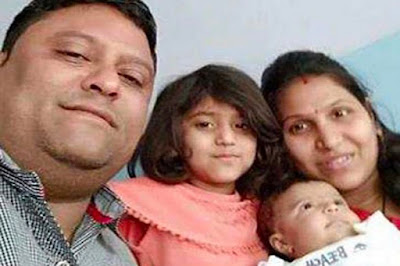 A dad hanged his two young daughters and sent WhatsApp photos of their bodies to his estranged wife before killing himself - and she is now being investigated by police.

The woman's in-laws are blaming her for the deaths and police have registered a criminal case for murder and abetment to suicide against the mum and her alleged lover.

It is claimed Rishikant Kudupalli, 40, murdered his girls - 18-month-old Kartiki and six-year-old Narayani - and took his own life in a twisted attempt to exact revenge on his wife Pragati, who was allegedly cheating on him.

The mum had deserted them and her husband, a college teacher, by eloping with her lover, local media reports claimed.


She was left horrified and distraught when she checked her phone and found pictures of the girls' bodies at the family's home in the city of Ballarpur in central India.

Police said the double murder and suicide were carried out in the early hours of Tuesday morning, the Hindustan Times reported.

Kudupalli was upset and angry after finding out that his wife was allegedly having an affair, his brother told police.

A few days ago, the wife allegedly eloped with her lover, deserting her husband and two daughters, the report claimed.

Kudupalli and his family had tried to find his wife, hoping they could convince her to return, the Times of India reported.

However, she refused to go home with them, the report added.

At about 1am on Tuesday, Kudupalli choked and hanged both of his daughters, snapped photos of their bodies and sent the images to his wife, said police.

He then took his own life.

After discovering the images, his wife alerted her father, and he contacted her husband's brother.

The brother rushed to the house and banged on the door, but no-one answered.

Neighbours helped him break down the door, and they found the three bodies.

Police were then alerted.

Kudupalli's family and neighbours have blamed his wife for the deaths and have called on her to be prosecuted, the Times of India reported.