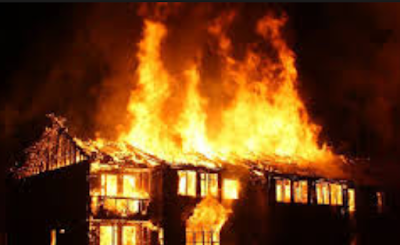 Police in Ondo State are on the trail of a loverboy, Deji Adenuga, who burnt the family house of his girlfriend, Titi Saanumi, killing five members of the family following a disagreement.

Three other members of the family who were also injured in the inferno which occurred, in the early hours of Tuesday at Adetuwo street in Igbodigo community of Okitipupa Local Government Area of Ondo State, were said to be receiving treatment at the Ondo Trauma Center in Ondo town.

According to a source, Adenuga was said to be irked with the decision of his girlfriend to back out from the relationship and he decided to deal with the young lady and her family.


It was, however, gathered that the girlfriend, Titi, had travelled out of town on Monday, unknowingly to his boyfriend who set the family house on fire in the early hours of Tuesday, killing five out of the eight members of the girl’s family in the building.

The source explained that the fire started around 2:45 am on Tuesday morning, and five members of the family had died before help could reach them, saying they were burnt beyond recognition while three others were seriously injured.

According to him, Adenuga decided to set the Saanumi’s family house on fire to punish Titi who jilted him and decided to dump him after many years of their relationship.
at April 24, 2019