Drake Pours Beer Out In Memory Of Nipsey Hussle 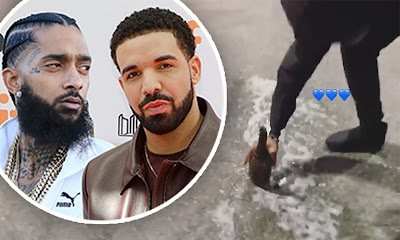 Drake poured out a beer in honor of the late Nipsey Hussle in an Instagram clip on Tuesday.

The Mob Ties rapper, 32, made his memorial gesture after the singer - whose real name was Ermias Asghedom - was fatally shot at the age of 33 in front of his South Los Angeles store Sunday.

In the clip, the Toronto, Canada native, whose full name is Aubrey Drake Graham, was heard saying: 'Exactly, exactly, that's easy, the whole thing, like that,' as he emptied the bottle in memory of his fallen peer.

The In My Feelings performer on Sunday had opened up on his relationship with Hussle - who he had past collaborated with on Nipsey's 2010 track Killer.


'F***. My whole energy is just at a low right now hearing this,' he wrote. 'We just linked for the first time in years and said we were gonna do a new song this summer cause it had been too long.

'You were having the best run and I was so happy watching from distance fam nobody ever talks down on your name you were a real one to your people and to the rest of us. I’m only doing this here cause I want the world to know I saw you as a man of respect and a don. Rest easy my g.'