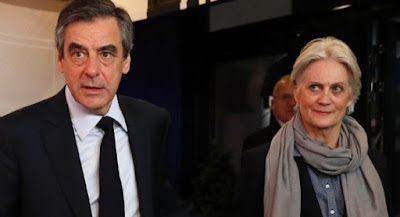 Former French Prime Minister Francois Fillon, whose 2017 bid for the presidency was torpedoed by a fake job scandal involving his wife, will face trial over the allegations, a judicial source told AFP today.

Investigating judges have recommended a trial for Fillon and his British wife Penelope on charges of misusing public money, conspiracy and failing to fully disclose their financial situation to a French watchdog.

Fillon was widely viewed as being on course to win the French presidency before the revelations were published by the investigative newspaper Le Canard Enchaine in January 2017, shattering his credibility.


Over several articles, the newspaper said it had seen payslips for Welsh-born Penelope showing she had been paid 680,000 euros (US$725,000) as a parliamentary assistant to Fillon between 1986 and 2013, but had done little or no work at the national assembly.

Fillon finished third in the first round of voting with 20.01 percent of ballots cast, behind centrist Emmanuel Macron and far-right candidate Marine Le Pen.

Under France's legal system, Fillon can appeal the decision to put him on trial.