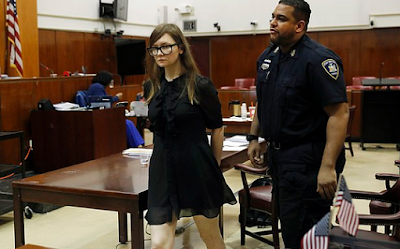 A New York jury has convicted fake German heiress Anna Sorokin of swindling tens of thousands of dollars from banks, hotels and friends.

Jurors returned a guilty verdict Thursday following a month-long trial. Sorokin was convicted of three counts of grand larceny and four counts of theft of services. She's to be sentenced May 9 and faces up to 15 years behind bars.

The one-time darling of the Big Apple has been on trial for the past month on grand larceny and theft of services charges after swindling friends, banks and hotels out of $275,000 in a 10-month odyssey.

'I thank the jury for its service in this complex trial, as well as my Office's prosecutors and investigators for their meticulous investigation and resolve to ensure that Sorokin faces real justice for her many thefts and lies,' Vance said.