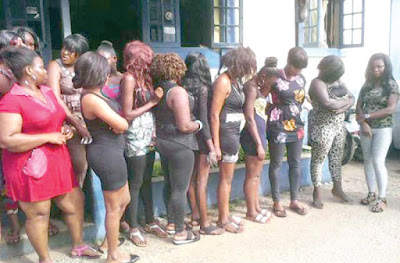 A mobile court in the Federal Capital Territory, Abuja, on Monday, sentenced 27 women to one month in prison for prostitution.

The convicts, who were arrested last Wednesday and Thursday, were, however, given an option of N3,000 fine each.

Their lawyer, Jennifer Ogbogu, explained that the sex workers pleaded guilty to the charges against them and were summarily convicted and sentenced.

She said, “The ladies were arraigned before the mobile court for prostitution and were each sentenced to three months in jail with an option of N3,000 fine. We have just paid the fine and all of them have been released from custody.”


The acting FCT police spokesman, ASP Gajere Danjuma, confirmed to Punch correspondent that 65 ladies were arrested by the task force set up by the FCT minister, adding that 38 were released after they were profiled.