Four Dead As Tricycle Collides With Train In Lagos 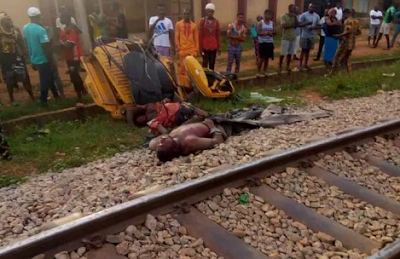 Four people have been killed as a tricycle collided with a moving train at Iju area of Lagos.

The incident occurred on Tuesday at Iju Ishaga area of Ifako Ijaiye, Lagos.

He said the agency received a distress call via the emergency toll-free number 112/767 regarding an accident at the Iju area, Shina Peters Road, Iju Ishaga on Tuesday, saying this prompted the immediate activation of the agency’s Response Team and other stakeholders to the scene of the incident accordingly.


“On arrival at the scene of the incident, it was gathered that a tricycle with five people on board had a collision with a moving train at the aforementioned address.

“Further information gathered at the scene revealed that the immediate cause of the incident was due to reckless driving on the part of the tricycle driver trying to cross the rail crossing.