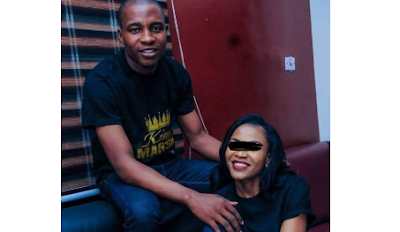 A Nigerian man, Marshal Bernard, on Monday April 15th, took to Facebook to announce the cancellation of his wedding which was meant to HOLD TODAY. According to Bernard, his fiancée called off the wedding days to the d-day and all efforts to get her to reconsider him has proved abortive. He took to Facebook to apologise to their sponsors and to inform family and friends.

Though Bernard never stated why she broke up with him, friends who however claim they know the truth, insinuated Bernard slept with her sister.

Now friends of the estranged couple have released a statement saying the story is FALSE and as a matter of fact, Bernard and Gloria are yet to see each other’s nakedness cus they did it the JESUS WAY. Their press statement below…


Against the spate of rumours, claims and counter claims on the circumstances surrounding the cancelation of the wedding between our friends Marshal and Gloria, we are constrained to make this official statement to clear all doubts and set the records straight as follows:

1. That Marshal and Gloria had a flourishing relationship which led to the man (Marshal) proposing to Gloria on Sunday 30th September 2018. The relationship was modeled according to Bible standards and by choice and in accordance with Biblical instructions, they agreed NOT to have any sexual relations up until their wedding day.

2. That after series of meetings by both families the traditional wedding was scheduled to hold on Thursday the 18th of April 2019, and the church wedding was fixed for Saturday, the 20th of April, 2019.

3. That after a little misunderstanding between both parties, Gloria, on Sunday the 14th of April, unilaterally canceled their wedding, stating that she and Marshal are incompatible, and as such, insisted that the wedding which was to hold in a few days be canceled.

4. That both Gloria and Marshal have massive respect and admiration for each other, and have at no occasion made any negative allegations against each other, as seen on social media.

5. That Gloria has NO younger sister, and the claim that Marshal had sexual relations with her younger sister is plain stupid. As a matter of fact, Marshal has at all times preached Bible tenets and could not have turned around to practice what he publicly stands against.

6. That both Gloria and Marshal are gainfully employed (one in a commercial bank, the other in one of the state Government House) and were financially transparent to each other.

7. That we have resolved not to make any further statement on this issue and we urge the public to respect their privacy as we continue to pray for their emotional well-being in these trying times. We therefore urge the general public to desist from further speculations and negative comments on this issue.

8. That all claims made in this statement are true and verifiable from both parties.