I Can Cause Trouble For Nigeria If Provoked- Kanu 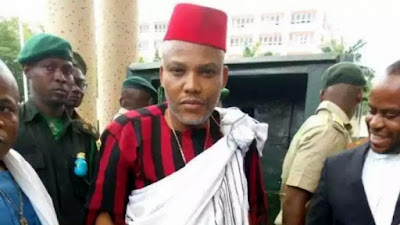 The leader of the Indigenous People of Biafra, Nnamdi Kanu, has asked the Federal Government  not to provoke him, adding that he has the capacity to make the country ungovernable.

He described an alleged plan by the Federal Government to arrest him with the International Police as an effort in futility.

He said he was a British citizen and so could not be subjected to any Nigerian law.


While dismissing the bail revocation as meaningless and senseless, Kanu said, “I am a Biafran that holds a British citizenship. Nigerian law courts and their judges are of no consequence to me.”