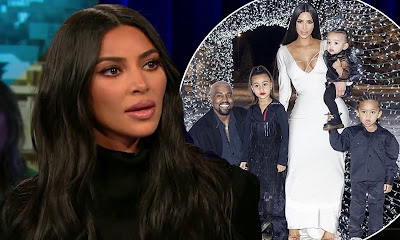 Kim Kardashian is speaking out on the college admissions scandal which has landed fellow celebrities Felicity Huffman and Lori Loughlin in hot water.

As one of the most influential women in Hollywood, Kardashian, 38, says she would never abuse her fame to get her children into school.

“If they couldn’t get into a school, I would never want to use privilege to try to force them into a situation that they wouldn’t thrive in any way,” Kardashian tells CNN’s Van Jones in a yet-to-air interview obtained by E! News.

“That’s what I see is not appropriate.”Kardashian went on to explain, that like most parents, she just wants her children to be “kind.”


“I want my kids to be as grounded as possible. To buy your way into something just wouldn’t benefit anybody,” Kardashian says.

Kardashian and her husband Kanye West are parents to daughters North, 5, and Chicago, 1, and son Saint, 3. The couple is also expecting a baby boy via surrogate.

In addition to being a reality star and a makeup mogul, Kardashian hopes that her latest venture to become a lawyer sets a good example for her kids.

“Having my kids see me studying, leaving and going into an office a few days a week, studying all the time coming home — I have my backpack they have their backpack. Them seeing that I have this filming career and having makeup samples tested all on my arm while I’m trying to read my flashcards.”

“I hope they get inspired to know that they can put in the hard work and even though I’m in my late 30s and just finishing college — it’s never too late and there really is no easy way out.”