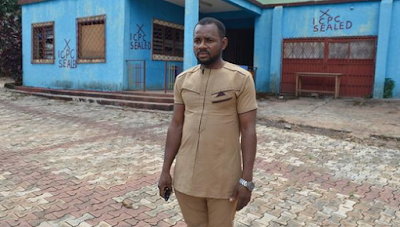 The Independent Corrupt Practices and Other Related Offences Commission (ICPC) has shut down a fake medical and nursing college in Enugu State.

The college is named the International College of Professions and is located in Nsukka.

A statement signed by ICPC spokesperson, Rasheedat Okoduwa, on Monday, said the school, also called Revo International College, located at the outskirt of Nsukka, ”has two science faculties, degree programmes in medicine, surgery, and among others”.

According to the statement, the college Rector, Nnamdi Obiukwu claimed that the school has a partnership with California University FCE, including accreditation from the National Universities Commission (NUC) and the state Ministry of Education.


But findings by ICPC reportedly showed that such accreditation did not exist.

”The school has faculty of applied and natural sciences, with degree programmes in basic and advanced auxiliary nursing, medicine and surgery, as well as Public Relations and Mass Communication.

”The Rector of the fake college, Rev. Dr Nnamdi Obiukwu, claimed before operatives of the Commission that the school is affiliated to California University FCE, with accreditation from the National Universities Commission (NUC) and the Ministry of Education, Enugu State.

”But checks by officers of ICPC indicate that such accreditation does not exist, as the fake college was only approved by the Enugu State Ministry of Education to run vocational programmes,” the agency said.