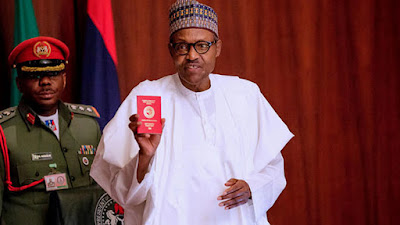 The Nigeria Immigration Service (NIS), has begun issuance of the new passport booklet with a 10-year validity period.

The enhanced polycarbonate passport booklet which was launched by President Muhammadu Buhari on January 15, 2019, was embedded with the National Identity Number (NIN).

Conducting newsmen round the passport office in Abuja, the NIS Public Relations Officer, Sunday James, said that the new booklet was part of a comprehensive passport reform approved by the Federal government to improve the quality and security of the travel document to reduce incidences of damage, counterfeit, and forgery.

He further explained that it was compulsory for passport applicants to have a NIN number, announcing that the service’s management had set up a desk for individuals to register for the NIN, describing it as mandatory.