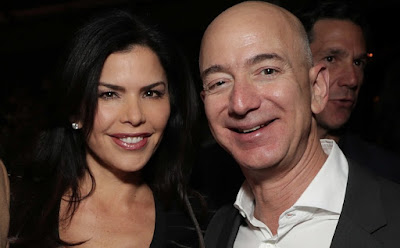 Jeff Bezos and Lauren Sanchez are reportedly staying apart until their respective divorces are finalized.

Sanchez has told friends that the pair have been apart since news of their affair broke in January, a source told Page Six.

The couple are said to speak every day and remain 'deeply in love' despite being apart.

'Lauren and Jeff talk all the time, but she wants to stay low-key until their divorces are final, when they will be together,' the source said.


'Lauren insists she and Jeff haven't seen each other since the Enquirer story about their affair broke on January 9, and that she and Jeff both decided to stay apart until their divorces were done, which could be within a few weeks.

It's mostly to protect the privacy of their children, but also because they felt it was the right thing to do.'

Bezos revealed in January that he and his wife MacKenzie were splitting after 25 years of marriage.

The announcement came just prior to the Enquirer publishing details of his affair with Sanchez.

Sanchez is in the process of divorcing her Hollywood agent husband Patrick Whitesell.

Sanchez has two children with her estranged husband and another child from a prior relationship.