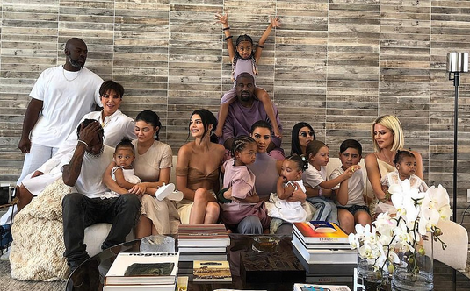 Kendall Jenner shared a special treat for her 108m Instagram followers on Friday morning. In a very rare image, almost the entire Jenner/Kardashian family can be seen - minus 32-year-old recluse Rob Kardashian - as they sit on a long beige sofa inside their Palm Springs mansion during Easter Sunday.

The 23-year-old Vogue supermodel did not add a caption but did share a heart emoji.

In the image 38-year-old Kim Kardashian is seen in a tight dress with husband Kanye West, who has on a purple shirt, as well as all three of their kids.


She has Saint, aged three, and Chicago, aged one, on her lap while North West, aged five, sits on the rapper's shoulders on the back part of the sofa.

The couple have already shared they are expecting a fourth child, a son, in May via gestational carrier.

To the far right is Khloe with daughter True, aged one, on her lap. Baby daddy Tristan Thompson of the Cleveland Cavaliers - whom she split from in late February after he was caught kissing Kylie Jenner's best friend Jordyn Woods - is not seen.

Next to her is Kourtney without ex Scott Disick, who is now dating model Sofia Richie.

The eldest Kardashian is with her children Mason, aged nine, and Reign, aged four. Daughter Penelope, aged six, does not seem to be in the frame.

And next to Kendall, who has on a sexy bikini brown top with arms straps, is her 21-year-old sister Kylie Jenner who has daughter Stormi, aged one, on her lap.

Kylie is in a beige dress with round earrings and her hair back.

The family seemed to be photographed when they were in Coachella where Kanye threw a Sunday Service that attracted 50,000 fans.

Missing from the scene is not only Penelope but also shy Rob Kardashian, who has not been on the family TV show for years. 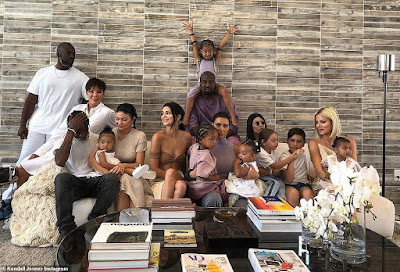 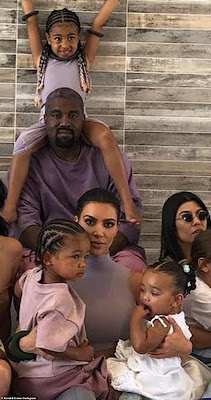 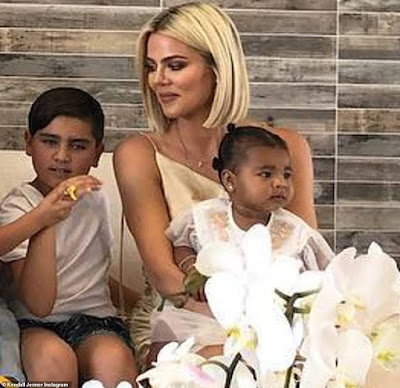 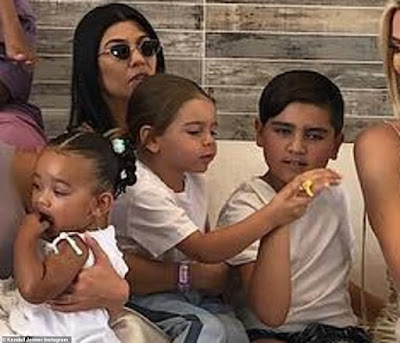 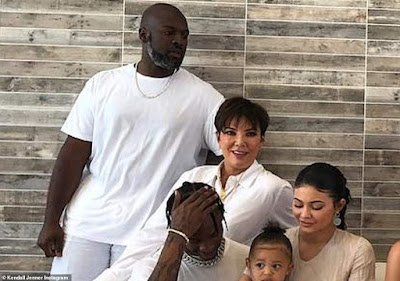