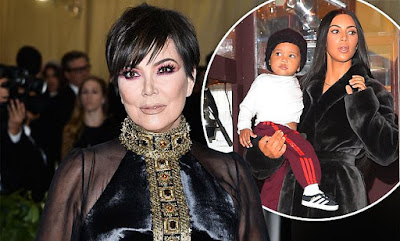 She's a doting grandmother to nine grandchildren, and one of the first family members called when there is any drama or crisis at hand.

And, Kris Jenner has revealed that Kim Kardashian and Kanye West's 3-year-old son was rushed to hospital 'a week ago or so' while they were all in Palm Springs, California.

The momager, 63, explained that after taking her grandson to the emergency room, it transpired that he may in fact have a grass allergy.

She told Refinery29: 'A week ago or so when we went to Palm Springs and Saint, my little grandson, we discovered he might be allergic to grass. We ended up in the E.R.'


While Kris didn’t confirm whether or not Saint was found to be allergic to grass, she added: 'All is well — we figured it out.'

According to the Asthma and Allergy Foundation of America a grass pollen allergy is one of the most common causes of allergy.