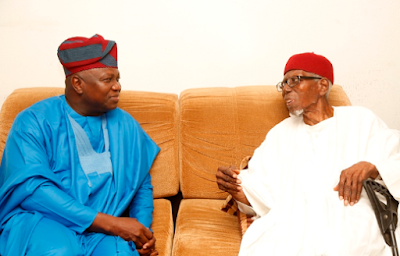 Popularly called HAB, Pa Fasinro, a Senator in the Second Republic and the first Clerk of Lagos City Council, passed on at exactly 8:29pm on Sunday evening after a brief illness.
He would have clocked 100 years by September this year.

Governor Ambode, in a statement signed by his Chief Press Secretary, Mr. Habib Aruna, said Pa Fasinro was one of the great founding fathers of Lagos, saying that he was one of the main architects of Lagos.


“This is a very sad loss, personally for me and for every Lagosian. I was personally looking forward to celebrating Papa at 100 later in September this year, but we cannot question God for calling him at this time.

“Papa was a hero. He was a father in the true sense of the word. We cannot write the Lagos story without recourse to the roles that he played from the start and from the bottom of our hearts, we appreciate the role that he played in building Lagos to what it is today.

Governor Ambode, while commiserating with the family of the late elder statesman, urged them to uphold the ideals he stood for, saying that the nation will continue to draw inspiration from his life and times.

“His demise, just like that of our heroes past, must never be in vain. There can be no better time to unite together to achieve a better and more prosperous Nigeria,” he said.
He said Pa Fasinro paid his dues and has left his footprints on the sands of time.

“On behalf of the government and people of Lagos State, I want to express our heartfelt condolence to the family of Pa Fasinro on this great and irreparable loss. He was a pride to our country, our state and we will surely miss him,” Governor Ambode said.