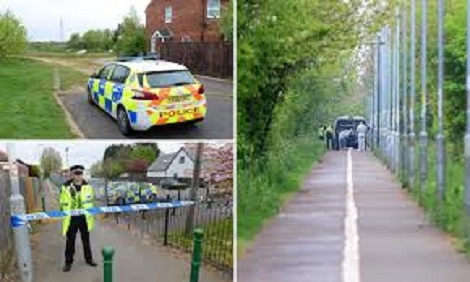 Part of a human leg found on a public footpath may belong to a young woman - and there are fears more body parts could be found.

It is believed the foot and lower leg may have been carried to the path, just yards from a school, by an animal.

Dog walkers raised the alarm when they made the grisly discovery in New Waltham, Lincolnshire, on Thursday morning

There are fears that more body parts may be nearby as Humberside Police widen their search area to include two large fields bordering the path and a stream, GrimsbyLive reports.


It is understood the foot and lower leg, which were found along an old railway line, are that of a female.

One of the dog walkers told neighbours the foot was a "size four" and said it was attached to the lower part of a leg.

The traumatised woman told residents she believes the body part belongs to a young woman.

A police cordon has surrounded the scene since Thursday as police try to unravel the mystery.