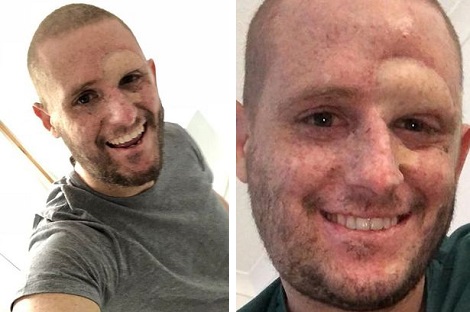 A man who is fighting for his life after being diagnosed with a rare and deadly form of cancer has made a desperate appeal.

Joshua Barnfather, 30, was born with Xeroderma Pigmentosum, a genetic disorder means his skin has a reduced ability to repair DNA damage, specifically that caused by ultraviolet light.

Since he was born, Josh from Hull has tried to avoid UV light and has covered up during daylight hours, stayed indoors wherever possible and adjusted his life and environment to protect his skin and health.

But despite the best efforts of Josh and his family, he has already had several non-life-threatening skin cancers due to his condition.


In February 2017, he was diagnosed with angiosarcoma, a deadly cancer with a 35 per cent five-year survival rate, affecting the inner lining of the blood vessels.

He wants to have treatment not available on the NHS that he believes could prolong his life, but it costs around£100,000 per year.

On his JustGiving page, Josh said: "After months of unsuccessful surgeries, chemotherapy, trial drugs and, most recently, radiotherapy targeting the lymph nodes in my neck, standardised  treatments  have been deemed ineffective.

"Because of my unique characteristics as a Xeroderma Pigmentosum patient, specialists believe that the immunotherapy treatment, Pembrolizumab, could extend my life.

"However, this is not readily available on the NHS for angiosarcoma patients and costs around £100,000 per year

"Your generous contributions will help to fund these drugs, their administration and associated care. No matter how small, I am grateful for any and all contributions to fund my treatment."

Josh, who has a business specialising in artificial intelligence and robotics, said his skin condition is extremely rare.

"I was diagnosed with Xeroderma Pigmentosum (XP) at 18 months old

"It is very rare genetic condition, affecting around 100 people in the UK.

"XP has meant that my skin has had to be fully covered and that I’ve had to wear a protective visor during daylight hours.

"The appeal was set up to fill a funding gap that prevented the  NHS  from funding the treatment I need," he said.

"Raising this money would give me the opportunity of an extended life, which would be severely limited on the treatment the NHS would fund."