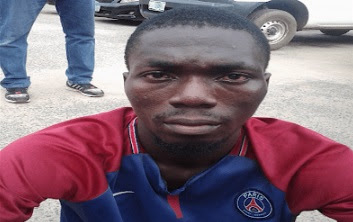 The police in Lagos have arrested a 27-year old man, Alowale Salu, who ambushed and used a gun to forcefully rape a lady who jilted him.

Salu was among the suspected criminal elements paraded by the Lagos State Commissioner of Police, Mr. Zubairu Muazu at the State Command.

Salu was said to have confessed but tried to justify his action saying that the lady in question humiliated him in their area. He said he lives with the victim in Ojumoye area of Ikorodu, Lagos, and had made several attempts to woo her to no avail. He said on several occasions the lady had disgraced him publicly and he decided to sleep with her to regain his respect.


“On the day the incident happened, I went to one of my friends, Bayo, borrowed a gun and ambushed the victim on the road at night. I made her to surrender, forcefully penetrated her and collected her phone before i allowed her to go” Salu said.

However, his action has landed him in big trouble as the victim identified and reported to the operatives of Federal Special Anti-Robbery Sqaud; he was traced to his house and arrested for armed robbery and rape.

The police said that the suspect will be charged to Court for the alleged offence which attracts life imprisonment or death sentence.