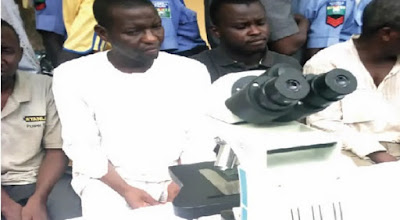 Operatives of the Kastina State Police Command have arrested a 30-year-old man, Hamza Sani, for allegedly conspiring with four others to steal a microscope belonging to the Malumfashi General Hospital, in the Malunfashi area of the state.

Sani was said to have sold the stolen microscope valued at N1.7m for a paltry N5,000.

Northern City News learnt from a police source that Sani’s arrest led to the apprehension of his cohorts, identified as Magaji Yusuf, 36; Saidu Shehu, 40; Kamala Aliyu, 33; and Emmanuel Ukelere, 48.


The state’s Police Public Relations Officer, Gambo Isah, while confirming the incident, said Sani and his cohorts specialised in the stealing of hospital equipment, adding that during interrogation, Sani confessed to the crime.

Isah said, “On Saturday, April 13, 2019, around 6am, the command succeeded in smashing a syndicate that specialises in theft of hospital equipment.

“Nemesis caught up with Hamza Sani when he was arrested at Malumfashi General Hospital, Malumfashi, in possession of stolen hospital equipment. In the course of investigation, Sani confessed to various related crimes in the hospital and named the four other suspects as his cohorts.”

Sani, who was paraded at the Katsina Police Command headquarters, told Northern City News that he sold the microscope for N5,000 because he needed money to treat his sick wife.