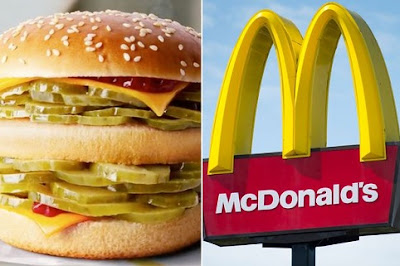 McDonald's has left some fans disappointed with its April Fools' Day prank, but others are just glad it wasn't true.

The company's Australian social media accounts posted a short video of the new burger, a Big Mac style but with piles of gherkins instead of meat.

The caption read: "Pickle lovers, it's the news you've all been waiting for. "We're super stoked to announce the launch of our brand new McPickle Burger.

"It's sure to be a treat for all your senses."

Fans were really excited about the new burger and couldn't wait to try it.

Another added: "I cannot wait to get one."

McDonald's later commented: "Available until yesterday" and people started to clock something wasn't quite right.

Another commented: "Omfg if this is april fools joke imma be mad."

Others demanded McDonald's actually add it to their menu, with one writing "Make it real" and another adding "I really wish this wasn't an April Fool's joke".

But other non-gherkin lovers were glad to learn it wasn't real.

One man wrote: "I'm glad this is April fool because I threw up a little when I saw it at first.

Another commented: "Even though this is fake it's still disgusting."

Seeing all the disappointment, one man suggested an alternative.

He wrote: "If you really really want one just buy a cheeseburger and ask for a billion extra pickles."