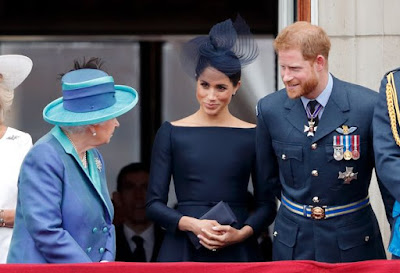 The Queen visited Prince Harry and Meghan Markle at their new home ahead of the birth of the royal baby .

The monarch saw the Duke and Duchess of Sussex at Frogmore Cottage, in Home Park, Windsor.

Meghan is expected to give birth any day now and the Queen wanted to see her before she has the baby, according to a royal source.

The source told The Sun: "Her Majesty wanted to formally welcome the Sussexes to their new home so she was their first visitor.


"After all, they’ve practically moved into her back garden. She visited with other family members and Harry and Meghan were delighted to show them round."

The couple have also welcomed the Duke and Duchess of Cambridge, Zara and Mike Tindall, and other royals to their new home, which recently underwent a £3million renovation, partly funded by taxpayers' cash.

Meghan and Harry previously said they did not know whether their child was going to be a girl or a boy, with bookmakers taking bets on the sex of the child.