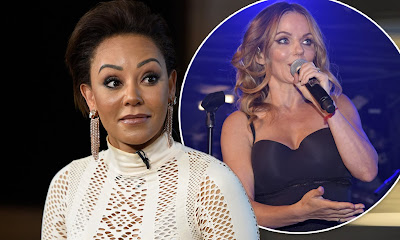 Mel B has reportedly been left 'perplexed' by Geri Horner's denial about their sexual history.

Scary Spice, 43, is not happy about being 'made to look like a liar' after her old band mate released a statement calling rumours of their romp 'simply not true'.

With 'bad blood simmering,' insiders also suggest that women are 'dreading' rehearsals for the Spice Girls' 2019 reunion tour, which commence later this month.

'Mel is totally perplexed by Geri’s denials,' a source told The Mirror on Monday night.


'Mel feels Geri is making her out to be a liar. She said, "It’s almost as if she is trying to erase our history."'

A second insider told the newspaper: 'There is a lot of bad blood simmering away. It’s going to be interesting.'

However, that's not the impression that Geri gave when she issued a denial about the secret liaison on Sunday.

Insisting that she loved all four of her bandmates, Geri said she 'couldn't wait' to reunite with them - even posting a video of her practising the old dance routines at home while she prepares for their stage return, on Monday.