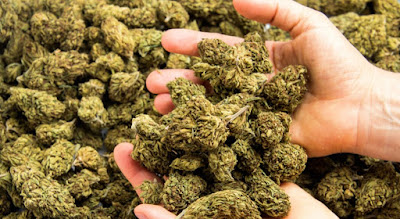 The Cross River State Command of National Drugs Law Enforcement Agency has arrested a 50-year-old man, Marshal De-Souza, for allegedly being in possession of 32 sacks of cannabis sativa in Calabar.

The State Commander, Mrs Anthonia Edeh, disclosed this on Wednesday in a statement in Calabar.

She said the suspect was arrested by the command’s motorised patrol team following intelligence report.


Edeh said that the suspect concealed the drugs under black polythene to ward-off suspicion by law enforcement agents.

“The suspect and the exhibit were later brought to the office where the substance were tested and weighed 344.1kg and proved positive for cannabis sativa,’’ she said.

She said the suspect had provided useful information to the command and had been charged to court accordingly.

Edeh said the command was doing everything within its powers to reduce the prevalence of illicit drug trafficking and abuse.

“I appeal to members of the public to assist us with useful information and to stand against the efforts of criminal elements tarnishing the image of this state.

“While I commend the state government for their cooperation, I appeal for more support to enable us rid Cross River of drug abuse and illicit trafficking,’’ Edeh said.