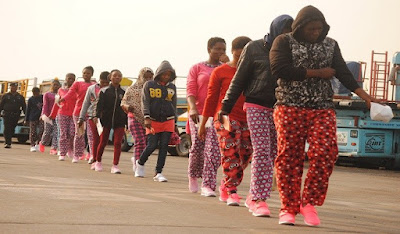 The National Emergency Management Agency (NEMA) has received another batch of 180 stranded Nigerians from Libya.

Muhammed said the Nigerians arrived at the Cargo Wing of the Murtala Muhammed International Airport, Lagos at about 9.30 p.m. on Monday aboard a chartered Buraq Air aircraft with registration number 5A-DMG.

According to him, they were brought back by the International Organisation for Migration (IOM) and European Union under the Assisted Voluntary Returnees (AVR) Programme.


He said: “The returnees are made up of 82 female adults, two female children and 11 female infants.

“Also, there are 79 male adults, one male child and five male infants making up 95 females and 85 males.”