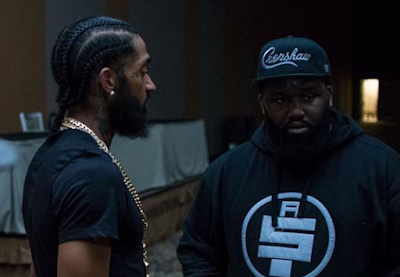 Nipsey Hussle’s longtime friend and bodyguard is retiring following the rapper’s death. J-Roc reflected on his friend’s death and announced his plans to leave the security profession entirely in an emotional Instagram post.

Captioning a series of photos, he wrote, “Never in a million years I thought I would be writing some s–t like this … we haven’t made a 100 Million yet … we was suppose to grow old and I call u big nose shoot jokes on you all day… but instead I’m here in tears writing this I wish I was there I would switch places with you any day the world need you here I’m so confused, lost , hurt I lost a brother, best friend, a mentor all I can here [sic] you saying now is If it was me, I would tell you, ‘N—a, live your life and grow.’ I’d tell you, ‘Finish what we started, reach them heights, you know?’”

J-Roc ended the post by assuring his late friend he’d watch over his girlfriend, Lauren London, and his two children.


“I got the Babies and L forever I’m done with all this S–t I retire from being a bodyguard I love you HUSSLE THA GREAT,” he wrote.