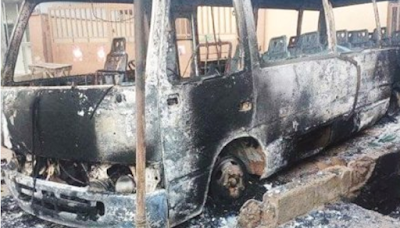 They torched his constituency office in Ifo and set ablaze five vehicles on the premises.

The hoodlums capitalised on the grand finale of the town’s annual Akoogun festival to attack Oluomo and destroy his properties and those of the federal legislator on the allegation that the All Progressives Congress (APC) and its chieftains invited the police to the festival.


It was learnt that operatives of the Special Anti-Robbery Squad (SARS) had trailed one of the boys suspected to have taken part in the violent opposition to the APC in Ifo during the last general election to the venue of the festival for being in possession of a gun and arrested him with the gun.

But his colleagues allegedly accosted the police and prevented them from taking the boy away. They also attempted to retrieve the gun from the policemen.

The Nation gathered that the hoodlums attempted to snatch an AK47 rifle from one of the policemen and in the struggle, bullets were released, which hit one of the boys, while the policemen fled.

It was learnt that the killing angered the hoodlums, who regrouped and stormed the constituency office of Oluomo, razing it and torching vehicles.

Oluomo, has urged the police and others to tighten security in Ifo and its environs.