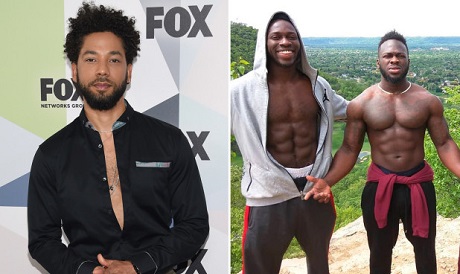 Jussie Smollett's legal team is being sued for defamation by two brothers who say they continue to be accused of carrying out a racist and homophobic attack against the actor.

Police say the attack was staged, which Smollett denies. Olabinjo Osundairo and Abimbola Osundairo say their reputations have been damaged as a result of the claims.


The brothers, known as Ola and Abel, said in a statement: "We have sat back and watched lie after lie being fabricated about us in the media only so one big lie can continue to have life.

"These lies are destroying our character and reputation in our personal and professional lives."

Smollett's legal team said: "At first we thought this comical legal document was a parody.

"Instead this so-called lawsuit by the brothers is more of their lawyer-driven nonsense, and a desperate attempt for them to stay relevant and further profit from an attack they admit they perpetrated.

"While we know this ridiculous lawsuit will soon be dismissed because it lacks any legal footing, we look forward to exposing the fraud the Osundairo brothers and their attorneys have committed on the public."

The Jussie Smollett case has been a complicated one to keep up with.