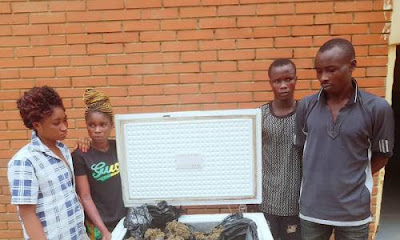 Four persons have been arrested with a deep freezer loaded with weeds suspected to be marijuana.

The suspects reportedly claimed that the freezer was to be used for sale of soft drinks. The four suspects – Opeyemi Wahab, 22; Kabirat Ahmed,21; Yusuf Rasaki, 20;  and Saheed Mustapha, 32 – were all arrested at black spots in Iperin, in the Agbara area on Saturday.

The state Police Public Relations Officer, Abimbola Oyeyemi, disclosed this in a statement in Abeokuta on Sunday.

Oyeyemi said the arrest followed the inauguration of  a special outfit code-named,  Operation Puff Adder,  by the Commissioner of Police, Bashir Makama, in compliance with the directive of Inspector General of Police, Adamu Mohammad.


The PPRO said the suspects were raided by a team of policemen led by the Divisional Police Officer in Agbara, in the Ado-Odo/Ota Local Government Area of the state, Adegbite  Omotayo.

He said, “The suspects were caught with the deep freezer which they pretended to be using for the sale of soft drinks,  but when it was opened, it was loaded with weeds suspected to be marijuana and they were apprehended.

“The raiding of black spots across the state is in furtherance of total clampdown on hoodlums perpetrating violence crimes such as armed robbery, kidnapping and cultism.

“On interrogation, the suspects confessed to being the major distributor of the substance in the Agbara area, saying they always use the freezer to distribute it in order to deceive security agents.” 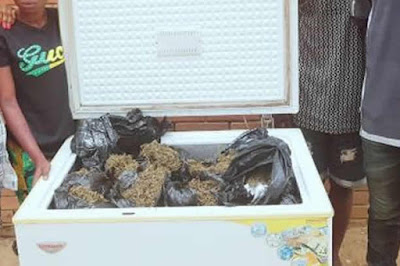