Policeman, 36, Admits Having S-x With 17-Year-Old Boy In Patrol Car 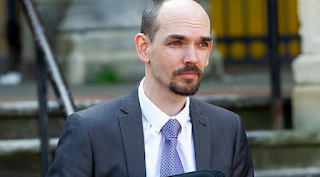 A former policeman has admitted having s-x with a 17-year-old boy while on duty in his patrol car after they met and drove to a stately home.

Pc Mark Martin, who has since resigned from Thames Valley Police, appeared before a judge yesterday, where he admitted a charge of wilful misconduct.

The 36-year-old was charged after details of the encounter leaked out to colleagues and he was suspended from duty.

Martin appeared before Judge Edward Burgess at Reading Crown Court today where he admitted wilfully neglecting to perform his duty while occupying a public office.


The judge ordered a pre-sentence report to be compiled on the ex-policeman who had been based at High Wycombe police station in Buckinghamshire.

The defendant offered the teenager a ride in his police car on November 8 and drove him to a secluded car park at Hughenden Manor, near High Wycombe, where the two engaged in consensual s-x, a court heard.

He was arrested weeks later - on November 28 - and charged on February 15, after he had submitted his resignation to police bosses in December. He finally left the force on January 31.

Appearing before Judge Burgess yesterday morning, the charge was read to Martin as he stood hunched in the dock.

It said: 'On November 8, while active as a police constable, you wilfully conducted in a way which amounted to abuse of trust by engaging in sexual misconduct with another male while on duty,' a charged which Martin admitted.

The case was adjourned by Judge Burgess until May 13, on which date Martin was set to be sentenced at the same court following his admission.