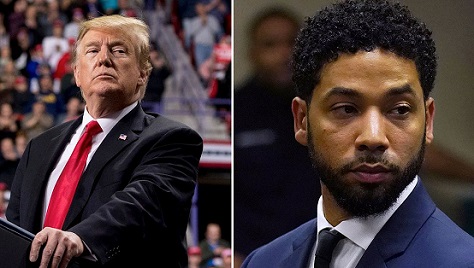 President Donald Trump has lashed out at "Empire" star Jussie Smollett at a rally on Saturday, calling him a "third-rate actor" and excoriating him for allegedly staging a hate crime against himself.

"We may have the greatest theme in the history of politics: It's called Make America Great Again.

MAGA. It's called MAGA country," Trump told his supporters in Green Bay, Wisconsin. "You know, I didn't hear that term until that third-rate actor in Chicago went out and he said, 'I was beaten up by MAGA Country.' Can you believe that?"

Smollett was accused in March of faking an assault at the hands of purported Trump supporters.


Smollett had said two men attacked him while shouting, "This is MAGA country."

Smollett was indicted by a grand jury on 16 felony charges, but Cook County prosecutors later dropped the case while maintaining that they still believed he had lied about the attack.

Trump seized on the issue during his rally Saturday evening, lamenting the fact that prosecutors dropped the charges.

"Now, that's a hate crime, right? He said he was beaten up by MAGA country. Turned out to be a total lie, but think of it. MAGA. Make America Great Again," he said. "And by the way, I have to tell you that case in Chicago was a disgrace to our nation. A disgrace."