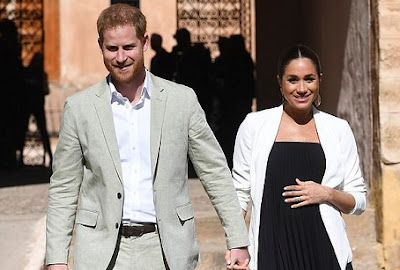 Meghan Markle and Prince Harry could move to Africa for two to three years for a 'bespoke' international job that will utilise their 'rock star' status, it has been revealed.

The royal couple, who are expecting their first child in the next few days, are set to be given a role that involves the Commonwealth, charity work and promoting Britain following the birth of their first child.

Sir David Manning, the former British ambassador to the U.S. and Lord Geidt, the Queen's former private secretary, are said to have drawn up the plans.


The Duke and Duchess of Sussex will supposedly be allowed to settle into their home in Frogmore Cottage with the baby before a decision is made about where they should go, according to the Sunday Times.

Although this is unlikely to be decided until next year, the role is likely to be in Africa because of the couple's ties there.

It holds a special place in the couple's hearts as Harry took Meghan to his favourite luxury camp Meno a Kwena in Botswana, to celebrate Meghan's 36th birthday and mark their first year together.