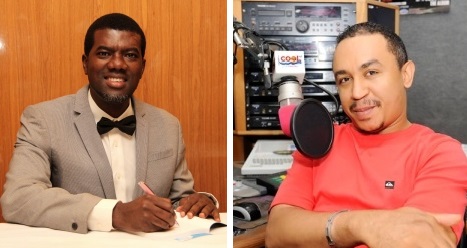 Oh dear! It seems a truck has passed in between Reno Omokri and Daddy Freeze o. So yesterday evening, Apsotle Suleman’s people in Dubai shared a video of him in his private jet and congratulated him. The news went viral shortly, especially with media houses reporting it this morning. Freeze heard about the news and demanded the Apostle explain how many poor members of his church has he helped, with Freeze ending it with, he needs an answer.
Reno who is a friend of the Apostle got very upset, with Freeze question and called him out. According to Reno, he once introduced Freeze to the Apostle and so he has access to him.

Reno went on saying, what Freeze is about to do is called blackmail and puts a doubt on his #FreeTheSheeple movement. Freeze made only ONE tweet, but Reno replied that same tweet SIX TIMES. When two elephants fight, lol… Continue …


Dear @DaddyFRZ, This question is not borne out of good faith. I know apostle Suleman personally. I also put you in touch with him privately. If you truly want to know the answer to that question, you can contact him privately #SulemanOwesNoExplanation

Dear @DaddyFRZ This is GRANDSTANDING and PLAYING to the GALLERY. Suleman has done so many charitable works but he does not like publicising them and I support him for it. But more importantly, you have his contact details. You DID NOT need to do this #SulemanOwesNoExplanation

Dear @DaddyFRZ You have private access to Apostle Suleman to find out a. Whether he actually bought a private jet, and b. What he does for the poor. Choosing to do this publicly when you have UNFETTERED private access to him shows UTMOST bad faith #SulemanOwesNoExplanation

Dear @DaddyFRZ Bible says "when you give to the needy, dont let your left hand know what your right hand is doing"-Matthew 6:3. Apostle has helped me raise money for Leah Sharibu's mother when she was in need. It is wrong of me to even say that publicly #SulemanOwesNoExplanation

Dear @DaddyFRZ I regret what you did with this post. I NEVER backbite. I say it to you before your face. This action makes the #FreeTheSheeple movement look like a movement to blackmail. If not, why do this to a man you have total unfettered access to? #SulemanOwesNoExplanation 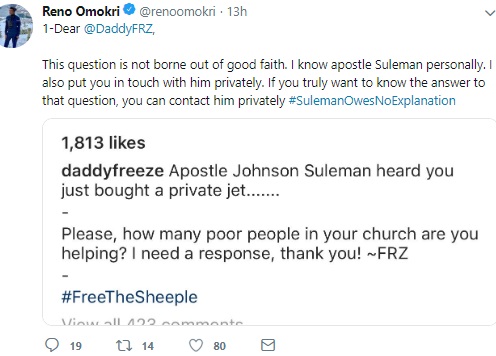