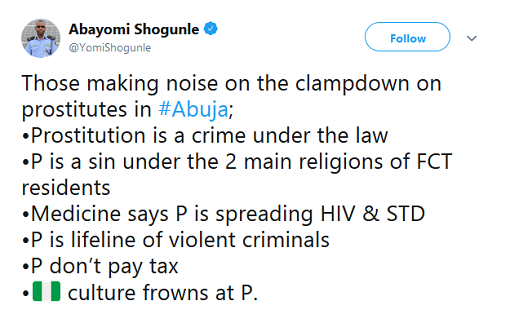 The Head of Public Complaints Rapid Response Unit, Abayomi Shogunle, has said that prostitution is a sin under the two main religions practised by residents of the Federal Capital Territory.

He slammed those who condemned the clampdown on prostitutes in Abuja, warning that prostitution is a criminal act in Nigeria.

He noted that the practitioners don’t pay tax to government, and concluded by saying that the (Nigerian) culture frowns at it.


Shogunle, an Assistant Commissioner of Police, made his view known via a tweet on his verified Twitter handle @YomiShogunle on Tuesday.

Shogunle tweeted in reaction to the arrest, conviction and subsequent sentencing of 27 prostitutes at the FCT.