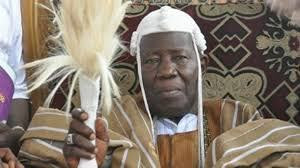 The Olubadan of Ibadanland, Oba Saliu Akanmu Adetunji, Aje Ogungunniso 1 , yesterday replied to the allegations levelled against him by the estranged members of his council.

The high chiefs, led by the Otun Olubadan, Oba Lekan Balogun, accused the monarch of denigrating the Olubadan institution by what they described as “illegal practices and apparent lack of regards for the council”.

But, the Olubadan, in a statement signed by his spokesman, Mr. Adeola Oloko, said there was no truth in the allegation raised against him by the Obas.

The foremost traditional ruler said he has no objection to the return of his embattled high chiefs to the palace once they remove their “illegal crowns”.


According to him, the statement credited to the embattled chiefs lacked substance.

The Olubadan said contrary to the allegations, he was not responsible in the first instance for their desertion from the palace and by so doing, abdicating their responsibilities to Ibadanland.

He also stated that rather than engaging in blame game, the embattled high chiefs, who, he alleged, were afraid of what is likely to befall them after May 29, when power would have changed hands, should have been bold enough to apologise to the people of Ibadan  and Yorubaland for allegedly undermining their customs and tradition.

Describing the crowns of the high chiefs as offensive to the customs and tradition of Ibadanland, the Olubadan said there was nowhere in Yorubaland, where two kings sit inside a palace.

He added that “it is always the king and his chiefs”.

“Apart from violating our customs and tradition, there is no law that backs the wearing of illegal crowns in Ibadanland,” he said.