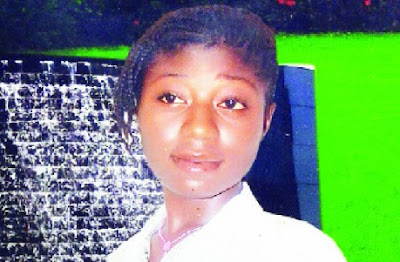 If the dead could talk or even be given a second chance to come back to life, youthful Charity Ngozi  Ezeh would not contemplate taking the decision to return home to take her preparatory lessons for JAMB and the nursing school.

She was brought up in Abuja where her parents eked out a living. Despite being low income earners, the parents struggled to see her through both private and public schools in Abuja until she wrote her WAEC and NECO exams including JAMB two year ago.  Though she could not gain admission into the higher school in the same year owing to her not having a credit in Chemistry, she did not relent, but took another WAEC and was successful.


Unrelenting in her desire to train as a nurse, the family decided to bring her nearer home and that was how she relocated to her hometown to retake JAMB and also write  admission exams for a nearby nursing school in Nsukka.

But the family decision, despite being the wisest for them at the time of the implementation, has turned out to be their greatest miscalculation and loss.

Ngozi’s aspiration to become a nurse has not only turned out a pipe dream, but her life was brutally cut short on March 27, this year by yet-to-be identified assailants who not only raped her callously, but also strangled her to death in a bush path behind the community secondary school.

For the family, it is a very bleak Easter celebration while darkness seemed to have enveloped their entire household. To say the least, the sunshine in their family has been taken away in a most callous manner, a situation that will only take divine intervention to forestall further calamity in the family because the parents have remained inconsolable since then. Worst hit, is the mother who has been oscillating between going nuts and retaining sanity since the incident happened.

My ‘soul’ has been taken away from me –Father

Sunday Sun reporter managed to extract some words from the distraught family during a visit to their home at Orukpa, Imufu community. Amidst sobs and sighs, Ngozi’s father, Jonathan, recalled the event of the day before he heard the shattering news of his daughter’s death.

Having relocated to the village from Abuja last year leaving the wife and the other children in the Federal Capital Territory, Ngozi and the second to  the last born joined him in the village this January.

As if he had a premonition that danger was lurking around the corner for her daughter,  he has been so protective of her that he made it a point of duty to drop her daily  on his motorcycle in the lesson centre at Ogrute and also comes back to take her home after the day’s activity.

“I take her to the lesson centre everyday, but I couldn’t find her when I went back to pick her back around 6:20p.m that day. I was confused because I know that she doesn’t know much people around having come back newly from Abuja.  I was restless when I got home and I raised the alarm immediately. Some people told me to relax that she may have decided to chill out with some boys, but I didn’t take that because I know her as a very reserved and pious daughter of mine.

“It was the next day that we heard people gathering somewhere talking about a young girl that was raped and murdered. They called me to come to the scene probably to identify her and lo and behold, when I got there, it was my beloved daughter, lying stone cold, legs parted, her skirt and under wear removed.

“This was a girl that has lived all her life in Abuja until now that she decided to be closer home in order to fulfill her life dream of becoming a nurse. They have taken away my soul and I can only cry unto God to handle this situation for me and my family. I want justice.  I want to see those who killed my precious daughter so I can say thank you to him/them,” he said bursting into tears.

Mrs Ginika Eze, Ngozi’s mother while recounting how she got to know about her daughter’s death said the phone call that Ngozi was missing remain the worst call she had ever received in her life. She noted that before now, she was so attached to her that it was very difficult for her to allow Ngozi relocate to the village this year because of her studies.

“I was too close to her to the extent that I had to think about it one day critically where I asked myself does it mean that she will not get married and relocate to her husband’s family one day. That was how I allowed her to leave me in Abuja more so as it also concerns her future and happiness which has always been nursing. But since she relocated, we talk on daily basis and on that day, I called as usual, but her line was switched off and I had to call her daddy. I asked my husband why her number was not available and he muttered some incoherent words saying that they have been searching for her. The next call was that her dead body has been found. It remains a great shock to me because if she had been sick before now, it would have been somehow understandable.

“My brain is bursting to pieces as I think about this. They told me Ngozi is dead, but I’m yet to understand the reality or circumstances of her death. If she had died in my arms after some period of sickness, it will pain me, but I will take it as her fate, but to brutally cut short the life of a harmless girl just like that, makes me go insane.”

When asked to describe the kind of person Ngozi was to her, she said: “She has been a very bright girl. That is my pains. If she was the wayward type, I would have taken it as her reward for such lifestyle, but this is a girl whose lifestyle revolves around church, home and studies, nothing more. She doesn’t have time for boys or such intimate stuffs.”