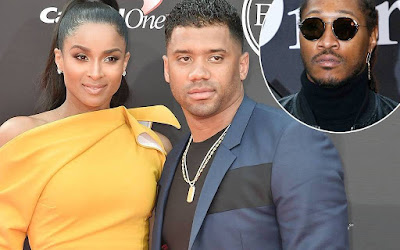 Lmao! Russell is a man! These words killed me!! May God not let us go broke or be irresponsible! Chai! Lol.

According to reports, Russell is urging Ciara to relieve her Ex Future of all child support payments for their son. Russell Wilson just signed the biggest contract in NFL history, and the Wilson family is financially sound.

Currently, Future has been ordered to pay child support to Ciara by a court and Future has claimed he pays Ciara $15,000 a month.

Wilson has debunked that myth and claims Future pays around $2,000 a month, which is not usually paid on time or consistently.


Due to the stress Future causes Ciara and Future Jr, Wilson said he just doesn’t want his wife to deal with. Here’s what Wilson had to say during an interview with paparazzi, Via Celeb Frenzy:

“I don’t like seeing my son and my wife stressing about such a minuscule amount of money. Ciara and her ex constantly argue because he’s not consistent and can go months without even paying. I can provide for my family without his little coins. I’m sure he needs the money more than we do. He’s got other kids in need, no need for him to over extend himself because we are set for generations ahead of us.”