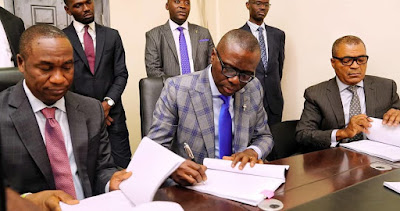 Sanwo-Olu’s victory is being challenged by the Alliance for Democracy’s Chief Owolabi Salis and Labour Party’s Prof Ifagbemi Awamaridi.

Sanwo-Olu, and his Deputy Dr. Kadri Obafemi Hamzat, arrived in Ikeja at 11:34am to receive and acknowledge receipt of the AD and LP petitions.

He also filed his response to both petitions.He said he would defend the mandate of millions of Lagosians at the polls.“We are very confident of victory,” Sanwo-Olu added.