Schoolgirl, 12, 'S*xually Assaulted By Group Of Men On Top Deck Of Bus' 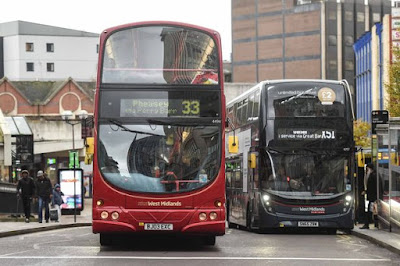 A schoolgirl was allegedly s-xually assaulted by a group of men on the top deck of a bus.

The 12-year-old was travelling into Birmingham city centre with three friends when they were approached by men thought to be in their early 20s, it is claimed.

It is alleged that the men approached them as the no.33 bus was in Kingstanding on Saturday March 16.

Police are investigating the alleged s-x attack said to have happened in broad daylight.


The girl's mother has issued a desperate plea for information, telling Birmingham Live her daughter feels shaken up.

She said she feels "useless" as she wasn't there with her daughter at the time of the alleged incident.

"No words can describe how I felt when she phoned me," said the victim's mum, who has issued a plea for information.

"I felt useless as I wasn't there when she needed me the most.

"Police officers are yet to come out to see us. We've only spoken to them over the phone.

"She was really shaken up; there were about six of them.

"The top of the bus was empty, but they went and approached my daughter and her mates.

"My daughter's friends were assaulted and they ran downstairs and off the bus. My daughter was left upstairs with them."

According to the victim's mum, the gang eventually left the bus in the city centre.