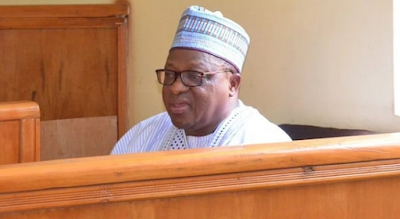 Former Governor of Plateau State, Senator Joshua Dariye, All Progressives Congress, APC, Plateau Central who is presently serving a ten-year jail term in the prison is co-sponsoring a motion in the Senate.

Presenting a motion entitled, ” Senseless killing of a Briton and the abduction of three others in a Holiday Resort in Kaduna State by Armed Bandits” by Senator Shehu Sani, PRP, Kaduna Central Thursday, Dariye’s name was listed as one of the co-sponsors.

Shehu Sani and one hundred and eight Senators co-sponsored the motion which is at the moment being debated on by the Senators.

Senator Dariye who was sentenced by the court for 14 years and still in the prison appeared as number 89 as a co-sponsor.