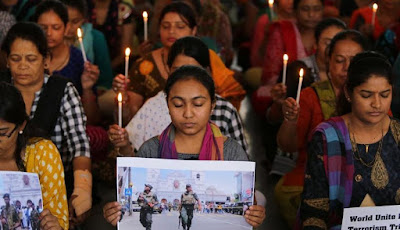 Sri Lanka fell silent for three minutes today on a day of national mourning to honour those killed in suicide bomb blasts on Easter Sunday as the death toll rose to 321.

The silence began at 8.30am to mark the time the first bomb detonated while flags were lowered to half mast on government buildings, and liquor shops were ordered closed for the day.

Mass burials also took place at St Sebastian's Church in Negombo, one of those targeted during the attack, as thousands of people gathered to pay their respects.

Sri Lankans honoured their dead as ISIS claimed responsibility for the attack which investigators believe was in 'retaliation' for the New Zealand mosque shootings.