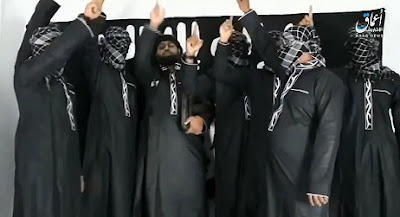 In the video eight jihadists stand in a circle, touch hands and pledge their loyalty to the elusive ISIS caliph, who has not been seen in public for five years.

With a black ISIS flag hanging in the background, the attackers chant in unison before raising their hands together and pointing to the sky.

ISIS had earlier claimed responsibility for the bombings on Sunday which have killed more than 320 people and wounded hundreds of others.


The massive casualty toll makes the Easter Sunday attack the deadliest overseas operation claimed by ISIS since the group proclaimed its caliphate in 2014.

'Those that carried out the attack that targeted members of the US-led coalition and Christians in Sri Lanka the day before yesterday are Islamic State group fighters,' IS propaganda agency Amaq said in a statement.

The group gave the noms de guerre of seven people it claimed were behind the 'blessed attack' that targeted Christians during their 'blasphemous holiday'.

Three of the fighters, named as Abu Obeidah, Abu Baraa and Abu Moukhtar were said to be behind the attacks on the Shangri-La, Cinnamon Grand and Kingsbury hotels.

Another three, said to be Abu Hamza, Abu Khalil and Abu Mohammad carried out attacks on churches in the cities of Colombo, Negombo, and Batticaloa, the jihadists claimed.

The seventh fighter, Abu Abdallah, killed three police officers in an attack in a Colombo suburb, according to the ISIS statement.

Amaq also released a photo of eight men it said were behind the blasts, of whom seven had their faces covered while three of them held knives and one apparently brandishes an assault rifle.

The reason for the discrepancy in numbers - seven fighters named, eight pictured - was unclear. ISIS did not provide evidence for their claims. 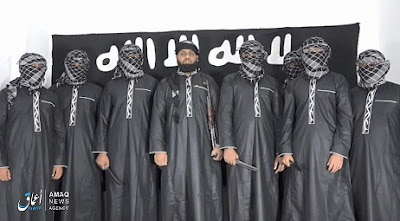 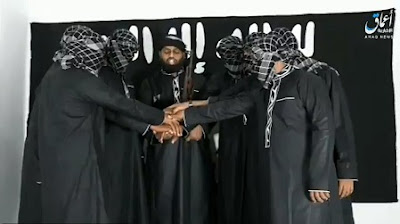