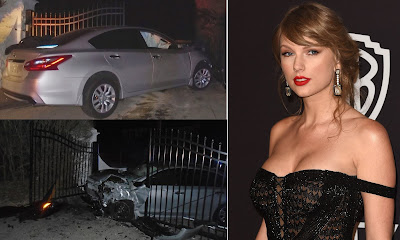 The life of a pop star is not always about fame, glitz and glamour because it also comes with some unpleasant experiences every now and then.

And when you are one of the world’s biggest pop stars like Taylor Swift, it is only expected that some unwanted issues may arise.

Grammy award-winning Taylor Swift was once again the host to another unwanted visitor at her Rhode Island home when a police pursuit ended with a stolen car smashing into her front gate.

It is gathered that police in Hopkinton, RI confirmed that at around 1 AM, a high-speed chase of a stolen car ended when the driver lost control and plowed into the main entrance gate at Swift’s estate
.

Thankfully, Swift wasn’t home at the time of the crash and nobody was injured although the teenage driver was arrested and has since been charged with reckless driving, felony receiving stolen goods, obstructing an officer and driving on a suspended or denied license.
This is not the first time Swift is having issues at the beachfront pad as in the past, a guy was busted trying to swim through rough ocean water to get on the property and another showed up on her doorstep proposing marriage.