Transgender Adults Are More Likely To Be In Poor Health, Study Finds 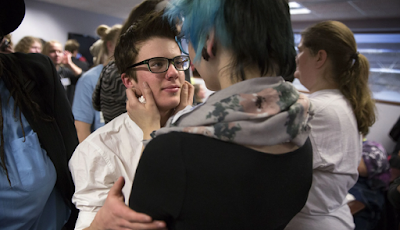 Transgender adults are more likely to be in poor health than those whose s-x matches what it says on their birth certificates, a new study says.

Researchers found that transgender people were more likely to be current smokers, physically inactive and uninsured.

They were also 30 percent more likely to report being in 'fair' or 'poor' health compared to their peers.

The team, from the Johns Hopkins Bloomberg School of Public Health in Baltimore, Maryland, is now calling for doctors to more closely monitor the physical and mental health of transgenders.


They were also 30 percent more likely to report being in 'fair' or 'poor' health compared to their peers.

For the study, published in JAMA Internal Medicine, the team looked at more than 3,000 transgender adults and more than 719,000 adults who are cisgender, meaning they identify as the sex they were assigned at birth.

An estimated 0.55 percent of the people in the survey identified as transgender, which suggests there may be about 1.27 million transgender adults in the US.

Overall, about 19 percent of transgender respondents were current smokers, compared with roughly 16 percent of cisgender people.

Nearly 35 percent of transgender individuals were inactive, compared with about 26 percent of cisgender adults.